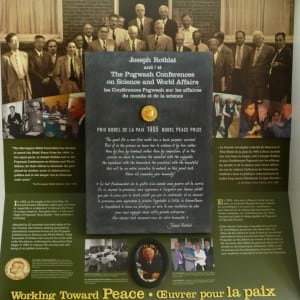 Welcome to Thinkers Lodge! This National Historic Site on the Northumberland Coast at the mouth of the Pugwash River Estuary is a unique place for your next gathering. Open from May through October, Thinkers Lodge dates back to the first half of the 19th century. In 1929, it was expanded and upgraded by Andrew R. Cobb, one of Nova Scotia’s most famous architects. Conferences, workshops, and educational events have been held here continuously since 1955. The most famous conference was the first Pugwash Conference on Science and World Affairs in 1957 that led to a Nobel Peace Prize in 1995 shared by the Conferences and by Joseph Rotblat, its spiritual leader. Rotblat’s Nobel is on display at the Lodge as is the Lenin Peace Prize won by Cyrus Eaton in 1960.

“In 1957, at the height of the Cold War, the first Pugwash Conference on Science and World Affairs took place in this serene setting. Hosted by philanthropist Cyrus Eaton, top-level scientists from both sides of the Iron Curtain met to discuss the threat of nuclear weapons and the responsibility of scientists to work for their eradication. This courageous and groundbreaking meeting launched the Pugwash Movement, an influential transnational organization for nuclear disarmament. A place of inspiration and reflection, Thinkers’ Lodge remains a symbol for the Pugwash Movement and a beacon for world peace.” 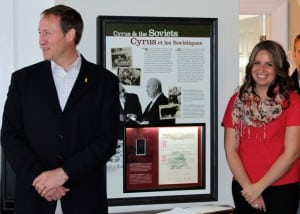 A sprawling white clapboard house, Thinkers’ Lodge is located on a spacious property jutting out into the Northumberland Strait. The oldest section of the two-storey, 14-room house dates from the early 19th century, and successive owners have constructed additional wings. A major addition was constructed in the mid-19th century on the east side, making the house into an L-shaped structure. After Cyrus Eaton acquired the property in the 1920s, an addition to the west was constructed, adding a two-storey gabled section in the front and a one-storey section in the back, with a generous porch along the side. Later, the original central section was extended at the back, and a veranda was added to the rear. Although the layered history of the house is readily apparent, the various additions were compatible with the original Cape Cod style of the house, making a coherent whole.

The restoration and rehabilitation work on Thinkers’ Lodge was completed in early August 2011 and the results were unveiled to the public during a very successful and well attended Community Open House on August 9th. Between 200 and 300 people took the opportunity to tour the refurbished lodge, many of them for the first time, and their reaction was extremely positive.

A highlight of the event was a talk by special guest Sandra Butcher, Senior Program Coordinator, Pugwash Conferences on Science & World Affairs who spoke about the significance of the name Pugwash around the world. “The name of your town has importance and relevance in places you can’t imagine,” she said. Butcher added that people throughout the international Pugwash Movement are excited about the work being done to restore and reinvigorate the National Historic Site. 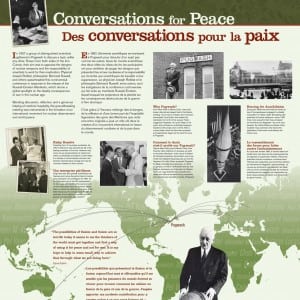 Restoration of Thinkers Lodge was completed in 2011. There are seven bedrooms each with private bath and it sleeps 14 double occupancy. Interpretive displays tell the story of how this became “the house that made Pugwash famous.”

Staying at Thinkers Lodge is like living a part of the history of peace making. Scientists and scholars from all over the world have stayed here and tackled the world’s most pressing issues through the power of dialogue. Guests feel the call of history and the inspiration that comes from knowing that the people who gathered here were determined to make a difference.

The Lobster Factory was completely renovated in 2013 with a new 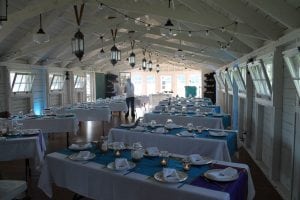 foundation, roof, fireplace, chimney, and modern commercial kitchen. The dining area seats 99 at distinctive antique tables and chairs believed to be the only existing complete set made by the Sibley family from Stewiacke, Nova Scotia.