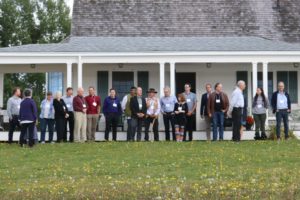 In 1955 the Russell / Einstein Manifesto asked: “Shall we put an end to the human race?” Or, shall we learn to think in a new way, come together and ask what steps are now needed to avoid catastrophe? The threat was Nuclear War and just two years later in July of 1957, 22 scientists from both sides of the Iron Curtain gathered at Thinkers Lodge in Pugwash, Nova Scotia, Canada to begin the process of mapping out those steps. This was the first meeting of the Pugwash Conferences on Science and World Affairs that together with Joseph Rotblat were honored with the Nobel Peace Prize in 1995.

Since then, this ongoing nuclear threat remains, but we are also now faced with new pervasive threats of climate change and the overshoot of our planetary ecosystem. As Steven Hawking stated in a December 1, 2016 op-ed in the Guardian, “This is the most dangerous time for our planet.” For the first time in the evolution of mankind, we are at a critical juncture. How we move forward may well determine whether organized human life will survive in anything like the form we know or instead, continue on its way to disaster. Now is the time for serious dialogue and for the articulation of a new manifesto on how we must conduct our affairs if we are to continue as a viable species on planet Earth.

From September 28th to October 1st, 2017, the Centre for Local Prosperity gathered together a group of international thought leaders, scientists, policy makers and community organizers at the newly restored Thinkers Lodge – 60 years after the 1957 meeting – to discuss climate change and the impact it is having on local government, policy, business, and individual lives. The Centre is planning to use the outcomes of this retreat  to promote a collaborative way forward that empowers municipalities, local residents, and innovative businesses to formulate their own path to restore, revitalize, and regenerate their local places.

We recognize that real answers come from the periphery – from local communities that innovate and adapt, and move forward in new directions that can be described as more cooperative and compassionate than recent political and economic history suggests. As a way to facilitate real answers, this retreat wove together four threads of discussion to be used to create a message important for Canada and the world:

1. Using the world’s wisdom traditions as community narrative changers and the basis for change.  The retreat drew on input from First Nations, Shambhala Buddhism and other earth-protector traditions as guideposts for new directions.

2. The solutions as put forward in Project Drawdown served as a point of reference for the best available information on climate solutions – their beneficial financial, social and environmental impact over the next thirty years. To date, the full range and impact of climate solutions has not been explained in a way that bridges the divide between urgency and agency. Thus the aspirations of people who want to enact meaningful solutions remain largely untapped. We are exploring the potential for scaling best mitigation solutions using Project Drawdown (www.drawdown,org).

3. Municipal Climate Change Action Plans (MCCAPs) that were required as part of the 2010-2014 Canada/Nova Scotia Agreement on the Transfer of Federal Gas Tax Revenues, provide municipalities with a framework for introducing climate change to local government and building knowledge and capacity.

4. Using these first threads as ways to build local community economic resiliency in a post-consumerism-focused world, and confirming a new narrative that the economy and the environment are not at odds with each other, but actually reinforce each other to build prosperity.

What is Drawdown? Drawdown is that point in time when greenhouse gases peak and begin to decline on a year-to-year basis. It is the most important goal for humanity to undertake. It is not a daydream because Drawdown is based on research that maps, measures, and models solutions that are already in place.

“At its core, Drawdown is a clear and detailed case of what is possible. We are counting what counts. By collectively drawing down carbon, we lift up all of life. We have the technologies, but we really have no sense of what it would take to deploy them at scale. Together, let’s figure it out.”

Drawdown starts to tell a new story of possibility, grounded in data and analysis. By cataloging what we already know how to do — and are already doing — we paint a picture of human brilliance, capability, and compassion. The skill and determination being expressed by humanity is a fact-based counter argument to the narrative that climate change is too vast, too hard, or too complex to tackle. In actuality there are many reasons to believe. Indeed, Drawdown analyzes 100 solutions that can be applied at the local community level.

About the Author: John Eaton